Skip to content
Yesterday, I was a bit shocked by the separation anxiety me and my son experienced as he went to school for the first time. It was overwhelming, considering that I leave him every day to work. I guess it’s a mistake not really preparing him for his first day of school. He shuns the idea ever since and I became an enabler by downplaying the topic. I thought I was doing what’s best which is not to pressure him. Let everything be as natural as it could be. After all, he is surrounded by older cousins who are all going back to school.
His class starts at 10AM. We were 10 minutes early. I dropped him off at the classroom door. Then, it closed, in a flash! I never get to see how he was towards the teachers, assistants and other kids. Thankfully (or unfortunately), the door opened again as the newly arrived students kept on coming. I saw my son, looking at the door. He repeatedly waved his hand to me, gesturing me to enter the room and accompany him. Then, I did the biggest mistake of waving back at him, signaled him to come to me so I can hear or know what he wanted to say to me. I did not want to dismiss his concerns, not before this day and absolutely not on this momentous day.
.
He rushed into my arms. He hugged me and I hugged back, even tighter. I carried him in my arms and he started coughing and tears started to form in his eyes. He was not in a panic attack. It was not his usual tantrums either. He was not whining. He was not crying loudly. He was dramatic. We were dramatic. Haha. It was like an airport scene, we were trying to hold back our tears but our eyes and faces betrayed us.
.
The good thing was, my husband was there to stop the drama. He took over and gave my son away to the assistant. The teacher whom we’ve known for years was quick to assist my son too. I usually dislike my son for his crying episodes because it could be just manipulative, noisy and even scandalous. I admit, it sometimes annoys me. That was the only time he cried silently and it pierced my heart a hundred times that I almost told him, “okay, let’s delay your first day of school, tomorrow na lang”.
My husband laughed at our drama, my drama. We went home and returned after 2 hours. Yes, 2 hours of separation lang ýun. My son was his usual jolly and playful self when we arrived home. I’m so amazed by his ability to tell stories about what happened in those 2 hours. He tells everybody that he cried just a little because he wanted to stay home to play. For the 2nd day of school, it was his lolo who brought him to school and back home. I think, he preferred that. He knows he’s more prone to be melodramatic again when I am around.
The lesson I learned from this is to prepare for the first day of school. No more downplaying. I still have one child to apply it for. Babawi ako! How about you? How was your kids’ first day in school? How did you prepare them? Leave your suggestions in the comment section below.
In the meantime, the Council for the Welfare of Children is having a 1 MILLION PENCIL DRIVE. They are aiming to collect 1 million pencils for the underprivileged children while trying to break the world record.

I once watched a documentary where children are using an inch of a pencil. Hay. Nakakainspire at nakakalungkot at the same. I really believe there are a lot of people who are willing and are capable to help, yung channel lang talaga how our help could reach those in need. Let’s not waste this opportunity. We have until November to raise that 1 million pencils (November is also National Children’s Month).
Donation boxes are found in all government offices, leading department stores and supermarkets. If you want to get one or help in any other way, just contact CWC (website in this link). 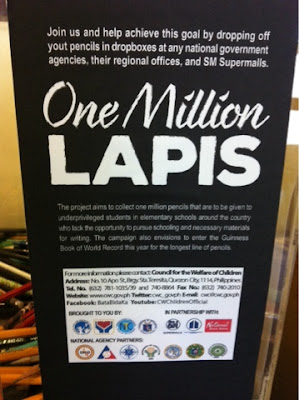 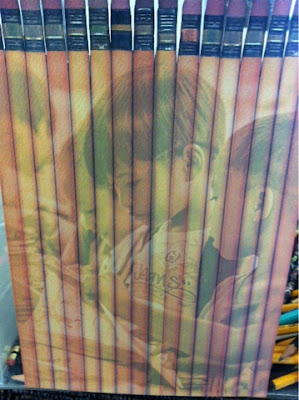 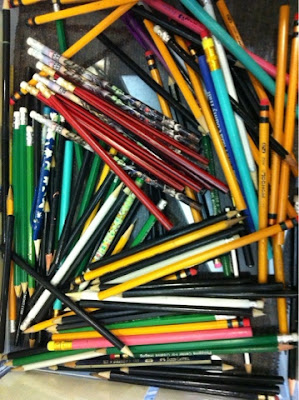