FOREX trading has finally caught my interest. So, the past few weeks have been a busy time for me trying to figure out if FOREX trading is for me or not. In the course of my research on the Internet, I’ve come across of blogs written by a few traders who, unsurprisingly, confessed about their HUGE losses from trading before they became profitable traders. For me, it’s a validation of everyone’s fear, which is to lose money in trading. Also, it’s a testament that losses and failures are all part of the learning curve. But, most importantly, they prove that losses and failures are inevitable in one’s journey to success.

Now that I am #InMy30s, I know I’m ready to accept losses and failures in order to move forward to my own path of financial freedom. I’m ready to face losses. I’m ready to fail. And, only because I know that they will serve as my guiding star if I allow them to be. I had my own shares of not only money mistakes but also of financial losses. Today, I wanted to pay a little tribute to them by remembering them and the lesson they taught me. 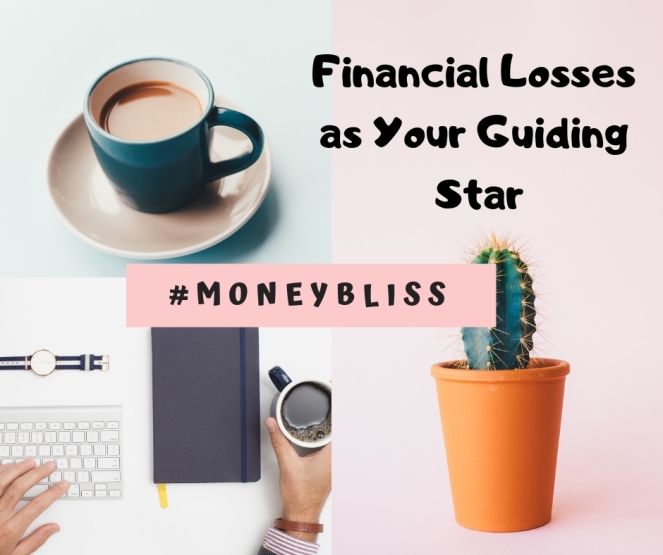 Buying a property without complete and proper documentation. I lost three hundred grand, two years’ worth of savings/investments because we, newly-weds at that time, hurriedly and carelessly bought a real estate property without complete and clean documents. The property was not originally sold to us so the Deed of Sale, mortgage, bank papers, and other documents were not on our name. It was under the name of a relative who no longer wanted to continue his loan. We paid him, and the bank automatically collected from his savings account. After two years, the bank presented him with arrears and penalties. Apparently, there were times when his account balance was not enough for the amount due. It was later foreclosed and goodbye three hundred. Ouch!

Joyriding in others’ investments. I put money in other people’s account in their cooperatives. I also gave money to people I don’t really know to supposedly fund various farm projects. Crowdsourcing is okay if you enter into it with sufficient information. Don’t do it blindly.

Trading penny stocks too soon. I did study the basics of stock trading. I also invest in blue-chip companies. But, I really wanted to trade so without enough seed money and solid background, I traded penny stocks. To do this, I sold my investments in blue-chip companies. Needless to say, I lost the profits and I believe a big portion of my capital as well. It’s really difficult to say how much because I didn’t really keep a stock diary then. With this experience, I learned an important lesson and that is to be patient. I should have built a capital for trading first and give serious time and attention in studying how to trade. I should have practiced in demo accounts before going live. For FOREX trading, I am now signed up into a demo/virtual account.

Going with the hype. This one hurts bad because I really knew I was just going with hype people in social media as I made no analysis to back up my positions. I’m talking about CHP and NOW. Until now, I’m trapped at the bottom but thankfully my positions are no higher than fifty grand. But, that’s still fifty!

Too much trading of blue-chip companies. Well, I made some money out of these trades. I earned from MEG, RLC, PCOR, PGOLD, SMC, ALI, SMPH, among others. The thing with blue-chip companies is that they tend to go higher and higher with time. My biggest regret would be selling my shares in SMC. I sold mine at sixty-something and eighty-something and their value now is more than one hundred. When it comes to blue-chip companies, it is best to be a long-term investor, taking advantage of peso-cost averaging.

Last year, I “rewarded” myself too much. I bought blings after blings. Our savings and investment port suffer. Our housing loan should have been fully paid if I hadn’t indulged myself too much. Right now, we still have a loan balance of two hundred grand.

Impulsive online shopping. Let’s include poor planning also. In one year, I lost sixty grand for uncancelled five-star hotel booking which I totally forgot, canceled flights to Hongkong, and online purchases abroad which didn’t see the light of day at Customs.

Not honoring my priorities. I know our financial priorities. However, I don’t strictly follow them. And, because of that, I’m pretty sure we’ve lost opportunities to save and invest. The evidence would be our port. It didn’t improve much last year. I didn’t go by our priorities, that’s why. So, now, I hope to stick strictly to our financial priorities. Tithe/Charity. Fixed Costs. Food. Health. Education. Allowances. Entertainment / Recreation / Experience. Other Material Things.

Writing down the above financial losses gives me a mixed emotion. There is both regret and satisfaction. I regret not taking better care of my hard earned money but I am satisfied with what I’ve learned from the losses. I could not help but think of what I might have bought or experienced with all the money that was lost but I also feel inspired to make wiser choices next time. Ultimately, I may not be overjoyed by all these fresh losses but I’m grateful that the more important things/persons to me, those that really matter are not lost. They are all still with me. I’m also happy to realize that I’ve been so blessed to be able to earn my own keeps.

I know that it is easier said than reality but it is just money, at the end of the day. No one can keep it forever. While living, you still can earn it but the journey, kindness, and learning in life, they are priceless.